Usha Parmer, Chief Executive of the award winning Sunrise Radio, provided an in-depth interview about her experience as a South-Asian woman. Her involvement in Bradford began when she was given the opportunity to run Sunrise Radio for six months but for Usha six months turned into a year which turned into twenty four years and she has “thoroughly enjoyed it”. Although it was challenging job for Usha, some of her earliest memories of Bradford are about how the South Asian community provided her with a close-knit community making her feel “like you were part of a family”. Usha also went on to say the South Asian community “have contributed a lot, not just to Bradford, but to the country itself”. 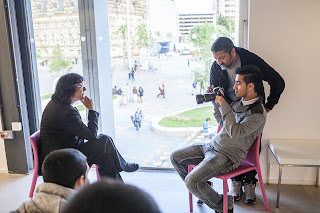 Next to be interviewed was Anita Rani (from BBC’s The One Show). Unfortunately, Anita was unable to come to Bradford in person so the interview was conducted online via Skype! Although Anita now lives in London she emphasised how she is “a Bradfordian through and through”. She told the group a lot about what Bradford meant to her when she was younger and how there was a strong sense of community in Bradford. In her view the South Asian community “are the backbone of Bradford”. Anita took the group on a mini ‘virtual tour’ of her house where she showed them a 1940s poster of the route from London to Yorkshire revealing that, not only does she have roots in Bradford, but she also has a poster of the route to Bradford! Anita ended her interview expressing her passion for Bradford saying “Bradford gave me everything, the most inspiring and creative city…I am proud, PROUD to be from Bradford.” 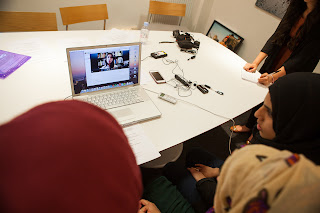 The workshop finally ended with Naveeda Ikram, the first female Muslim Lady Mayoress, provided us with an insightful view on her connections to Bradford. Although she wasn’t born in Bradford, her father’s work brought her and her family to the city. Naveeda brought along a medal which is important, not only to her, but to British history as it celebrates her role as the first Muslim Lady Mayoress. This position allowed her to change public perceptions of Muslim women and show what South Asian women can cheive in public life. Naveeda remains a social activist and is now the first Muslim female director on the Council of Mosques in Bradford. 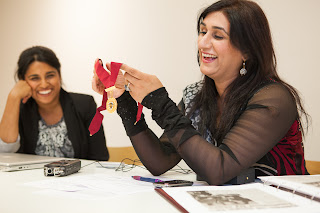