The Changing Bradford project has unearthed some fabulous stories. Here is one of the heartwarming from Bradford's most well established Asian businesses. 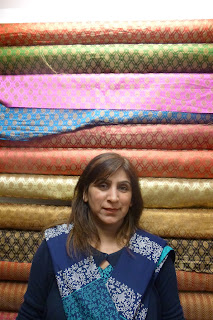 Sabra is the proud daughter of Abdul and Mariam Kader, founders of Bradford's famous Bombay Stores - "Spreading shopping delights since 1967" is the slogan above the doors. Sabra tells how her dad started life selling sweets in the street as a little boy in Bombay, India, "but he had a dream". Able to read and write, he later made a living helping people fill in visa application, then one day filled in one himself! Arriving by plane in London he was told that Bradford was a good place to go, so he did! Starting by sweeping up in Lister Mills, then working as a bus driver, he and his wife - who had previously been a seamstress, selling fabric from home - combined their skills and energies to set up a small fabric shop in a former fish and chip shop on Great Horton Road. From such small beginnings the Bombay Stores grew until it is now reputed to be the UK's largest Asian department store, attracting customers from far and wide. It is still a family business, with Sabra's brother Saleem playing a key role.
Posted by COEMO at 13:37